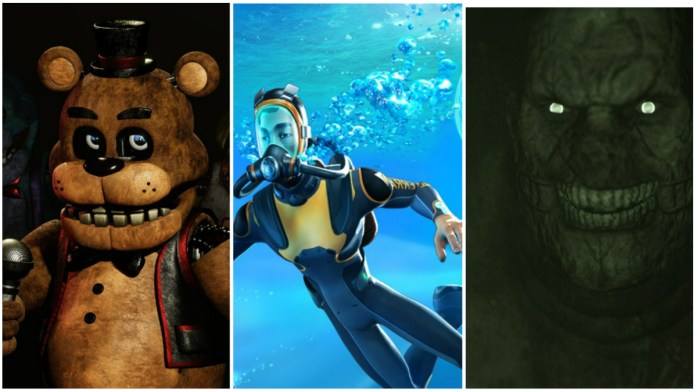 Horror games are certainly a niche not really enjoyed by those who frighten easily. However, those who appreciate them do so in a way that few others can. It isn’t just fear that makes a horror game good, it’s the context in which that fear is presented. In addition, horror games often tell the most fantastic stories that come with a deep lore. These are the qualities we look for in a well-regarded horror game. These are the 5 best horror games of all time.

One would think a night security job in a children’s entertainment center would be simple right? No burglar wants to steal subpar greasy pizza after all. Of course, that changes when the resident mechanical mascots are possessed by evil spirits determined to kill you. Pack up because you’ve got a long night ahead of you bunkered up by yourself in a security office. This game is a classic, executing the perfect jump scares that will definitely push you out of your seat. When you learn the lore of the story, you might be surprised.

RELATED: The Ten Best Horror Games for Android in 2021

Outlast is the perfect name for this game because it’s not a matter of finishing the game, it’s a matter of how far you can get before you’re too frightened. Play a journalist who must escape from a mental institution where the patients are former test subjects. The vibe of the game is extremely creepy because it somehow doesn’t feel all that fantasy-like at times. The mind can be an unpredictable thing and Outlast proves that.

Don’t be fooled by the pretty art style in The Witch’s House, this game is not for the faint of heart. In this classic RPG Maker, you explore a mansion filled with puzzles and twists and surprises that will always have your heart fluttering. One wrong move can mess up everything or get you an unwanted ending. It’s a well written game with replay value that any horror enthusiast will enjoy.

Not all scary games take place in dark and dreary settings. In Subnautica, you crash-land as the sole survivor on a mysterious planet that is about 96 percent water and 4 percent land. Besides a life pod base, you are essentially stuck inside an open ocean filled with alien marine life that would be happy to feast on you. Your goal is to find a way home, survive on this planet, and mostly importantly, avoid the jaws of the terrifying reaper leviathan.

People who can’t stand to have their weapons taken away in horror games may find they enjoy Condemned: Criminal Origins. This story puts the player into the perspective of an FBI agent working in the serial killer unit. Agent Ethan Thomas is investigating a case of mysterious murders, but this is no ordinary serial killer. Ethan finds a case more twisted than he could ever imagine in this dark tale.

If you’re in the mood for a fright, all of these games are worth checking out! Each one will creep you in similar yet unique ways.