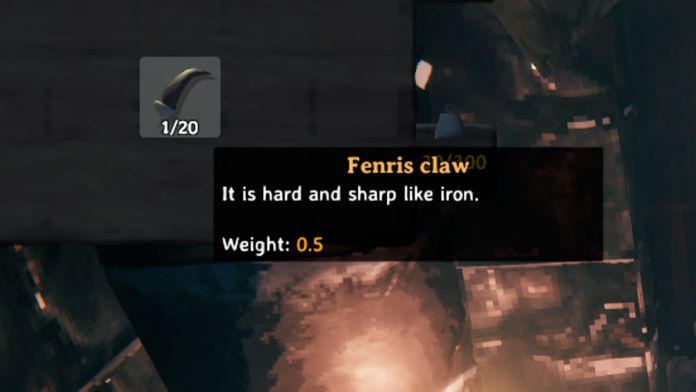 In the world of Valheim, you must live off the land in order to survive the future onslaught of foes. Your equipment must be crafted from the materials found in the world, and today we’ll be looking at one such material, the Fenris Claw. We’ll show you how to get Fenris Claw in Valheim!

Getting Fenris Claws in Valheim

Fenris Claws are named after the legendary wolf, Fenrir. These somewhat uncommon claws are mostly found within the cold and dark Frost Caves that line the Mountain biome.

As such, you’ll want to pack some heating items to brave the cold, like Frost Resistance Meads or by wearing wolf armor. At the very least, bring resources to craft Campfires, as they’ll also keep you warm.

When you’re ready, you’ll want to find a Mountain biome. They’re usually not on the starting island, so you’ll probably have to sail to another island. Look around towards the center of the island for the best chances of finding a Mountain biome.

You’ll know you’re getting close when the elevation starts to rise. Once you start seeing snow capped rocky ridges, you’ve found the Mountain biome! All you need to do now is find a Frost Cave. You can’t miss the entrances to these things, as they’re large and covered in icicles.

Related | How to get core wood in Valheim

Inside the Frost Caves, you’ll need to make your way into the deepest regions of the cave. You’ll face off against Bats, Ulvs, and later on, Cultists.

Look for a wooden door—that’s a sign you’ve found a Cultist hideout. Head inside, and prepare to fight off some Cultists. Beware, as they can blast you with fire magic, and if you’re burning you’ll take moderate damage over time.

Eventually, you should find a shrine dedicated to Fenrir. You can find a Fenris Claw on one of the pedestals, alongside some Fenris Hair. You can find more pedestals like this if you continue to explore the hideout.

That concludes our guide on how to get Fenris Claw in Valheim. If you have any other tips or questions, let us know in the comments below!

How Old Are You In Pokémon Scarlet and Violet? Answered

Deep Rock Galactic – How to Level Up Fast

How to Get Electric Claw in Blox Fruits – Roblox Guide

Victoria 3: How To Reduce Radicals