Set in a post-apocalyptic future where humans have migrated to shelters in outer space, this JUNG_E was focused on the creation of an AI being based on a formidable soldier called Captain Jung, who was on the verge of stopping the civil war between the Allied forces and the Adrian Republic. And today, we’ll go through JUNG_E Ending Explained.

However, with the AI needing to stop the war, things kept going wrong and grinding the process to a halt. What’s on the surface level? This movie was about what I just mentioned, and it was actually far deeper than that. And was actually focused on grief, feelings towards a machine, the distinguishing factors in what makes something human, and the love that one can have for another.

JUNG_E was based around Cronoid, a Robotics Company, creating an AI soldier that they believed would be able to end the Civil War that was unfolding throughout civilization between the Allied forces and the Adrian Republic, which now consisted of shelters 8, 12, and 13. 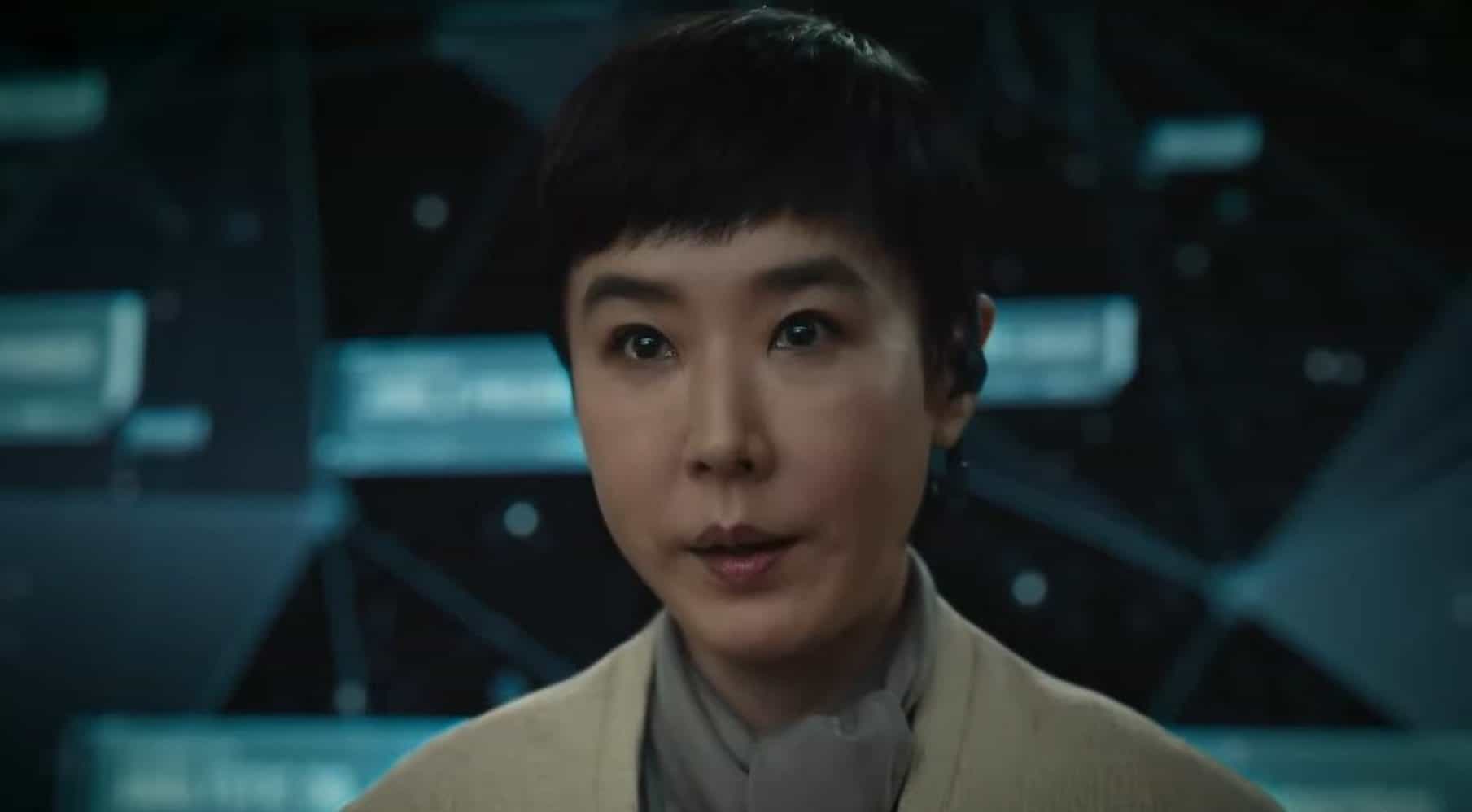 We had team leader Hyun who was working on the project, but it was extremely close to home for her. This was due to the fact that her mother was captain Jung, the person that the company was basing their AI on, due to the fact that she came the closest that anybody had ever come to ending the Civil war.

As we embarked on the end of the movie, we saw that the chairman of the company was looking at shutting the project down. This was due to the fact that the treaty had been signed between the two sides, and it looked as though the war was going to be over. This then meant that all of the work that went towards creating the best soldier was going to be put towards a different area, and this was focused more on the domestic side of things.

Things like having robots around the house to complete chores for individuals. This then meant that Captain Jung’s brain and programming, team leader Hyun’s mother, would be utilized in a different way. And we saw one of those ways was of the adult nature.

This was due to the fact that when a person decides that they want to transfer their brain over to a robot shell in order to live forever, there were actually three different categories that they could choose.

Team leader Hyun was suffering from a terminal illness and only had three months left to live. So she was facing the moral question of what she should do, as it seemed she didn’t want to transfer over. 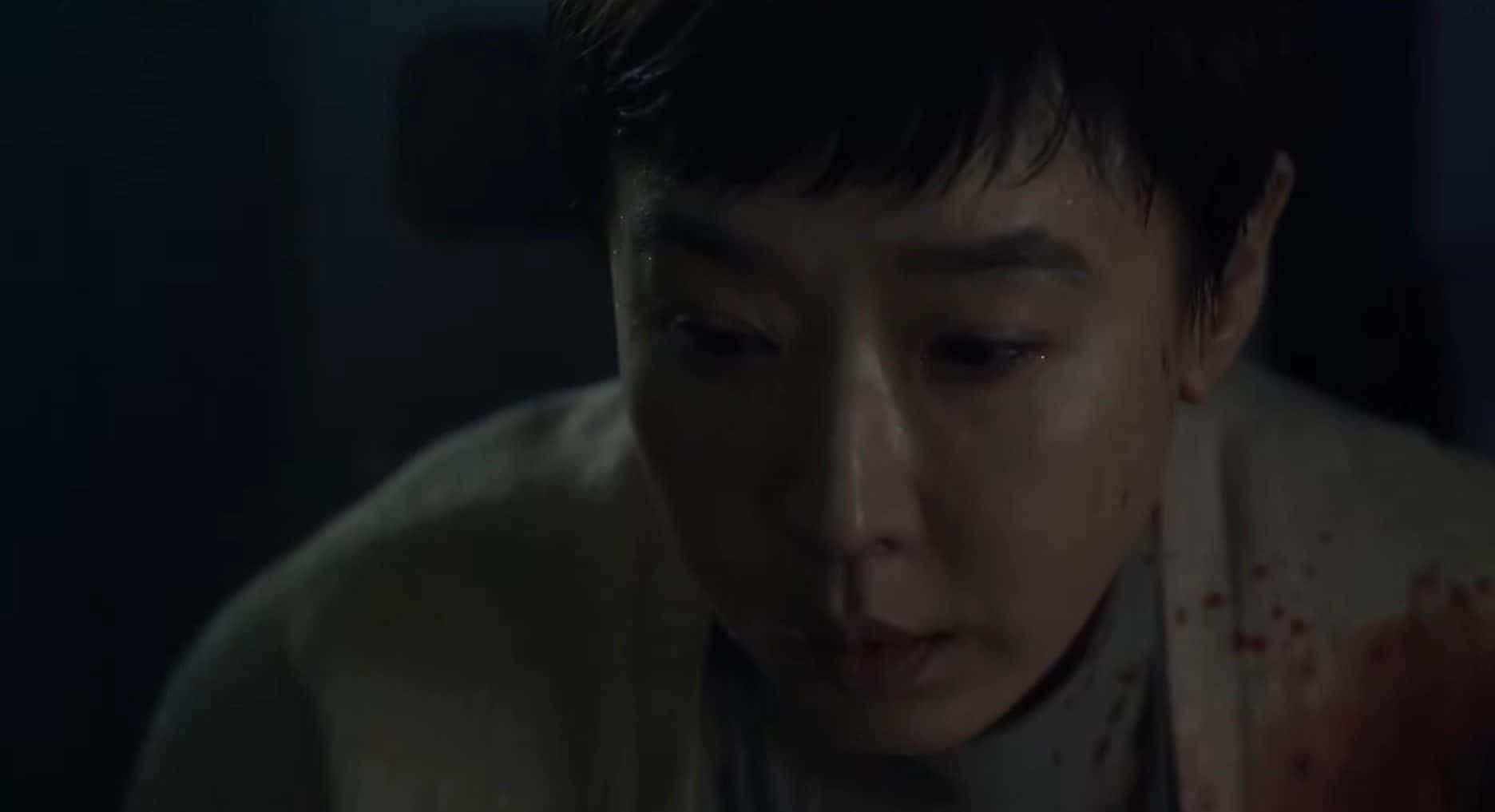 We heard in conversation with the Chairman how he didn’t believe in it. Because even if there was a copy of the brain inside of it, it was still hollow on the inside. Showing that the fibers that makeup who we are, make us human beings. And I believe in the end, she felt that too, with her looking like she wasn’t going to make any decisions and that she was going to die naturally.

With team leader Hyun worrying that her mother resented her, as she only went to battle one final time due to the fact that she needed to pay for the operation that was needed in order for her to survive, we saw that her mother didn’t present her at all in the final moments of the movie.

When Hyun informed a weaker version of her mother that she was dying and that she was going to die peacefully. But before she did, Captain Jung asked if her daughter survived the operation and that she wanted to be by her side when she awoke, showing that there was no resentment embedded within her whatsoever. The yellow side that was unlocked in the brain was the memory of her daughter, and it was the very thing that gave her the fight to continue and survive.

With the thought of the different copies of her mother being utilized everywhere for many different reasons, Team Leader Hyun wants to free a version of her and allow her to go on and leave some kind of life, even if it was on her own.

So with that, we saw her devise a plan that when Captain Jung was in sleep mode, she spoke to her and told her what to do. Captain Jung was always hit in the simulation and died at the same spot. So Hyun told her mother to fake what normally occurred and then she’d be able to break free. We saw that it initially worked due to the fact that her eyes moved, something that they never did in that state.

With the police being called and the alarms being sounded, we saw the team leader Hyun move her mother’s brain over to one of the advanced AI shells so that you’d be able to sneak out in disguise. And it was from this moment that we saw an epic battle occur between Captain Jung and the Director of Cronoid Sang Hoon, where he eventually went on to find out himself that he was created by the chairman as an experiment. 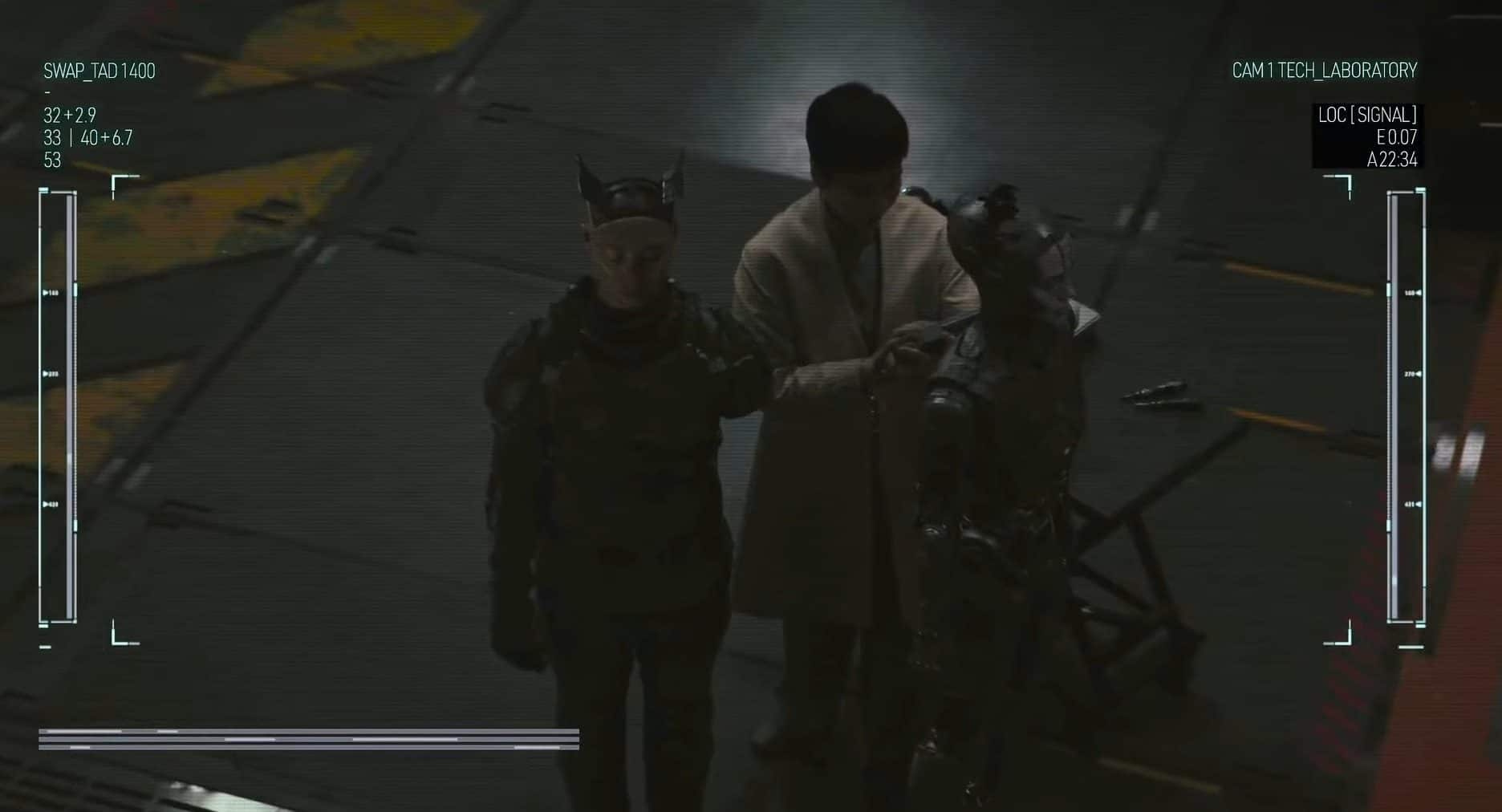 This then saw a fight scene that was filled with ups and downs, great camera work, and choreography, which ultimately saw Hyun injured and Sang Hoon falling to his death as the train dropped hundreds of feet from the sky. We also had a twist here as well, where we saw Hyun remove the memory of her mother having a daughter from her brain, so that she should be able to go on and live life through me without holding on to anything from the past.

However, with the authorities closing in and Hyun’s life slowly fading away due to her injury, we saw that her mother gave her the cheek rub that she gave her before she had her surgery, showing that the memory was still within there and that she knew that she was her daughter despite not saying that she ever was. It was quite an emotional moment.

I thought it was a powerful Ending for JUNG_E that showed that even though it wasn’t the human version of her mother, she still viewed her as her mother, cared for her, and wanted the best for her. And with the way that Captain Jung acted by giving the cheek rub, it showed that she was inside of the shell and that it went against what the chairman said, how they can be just like humans. 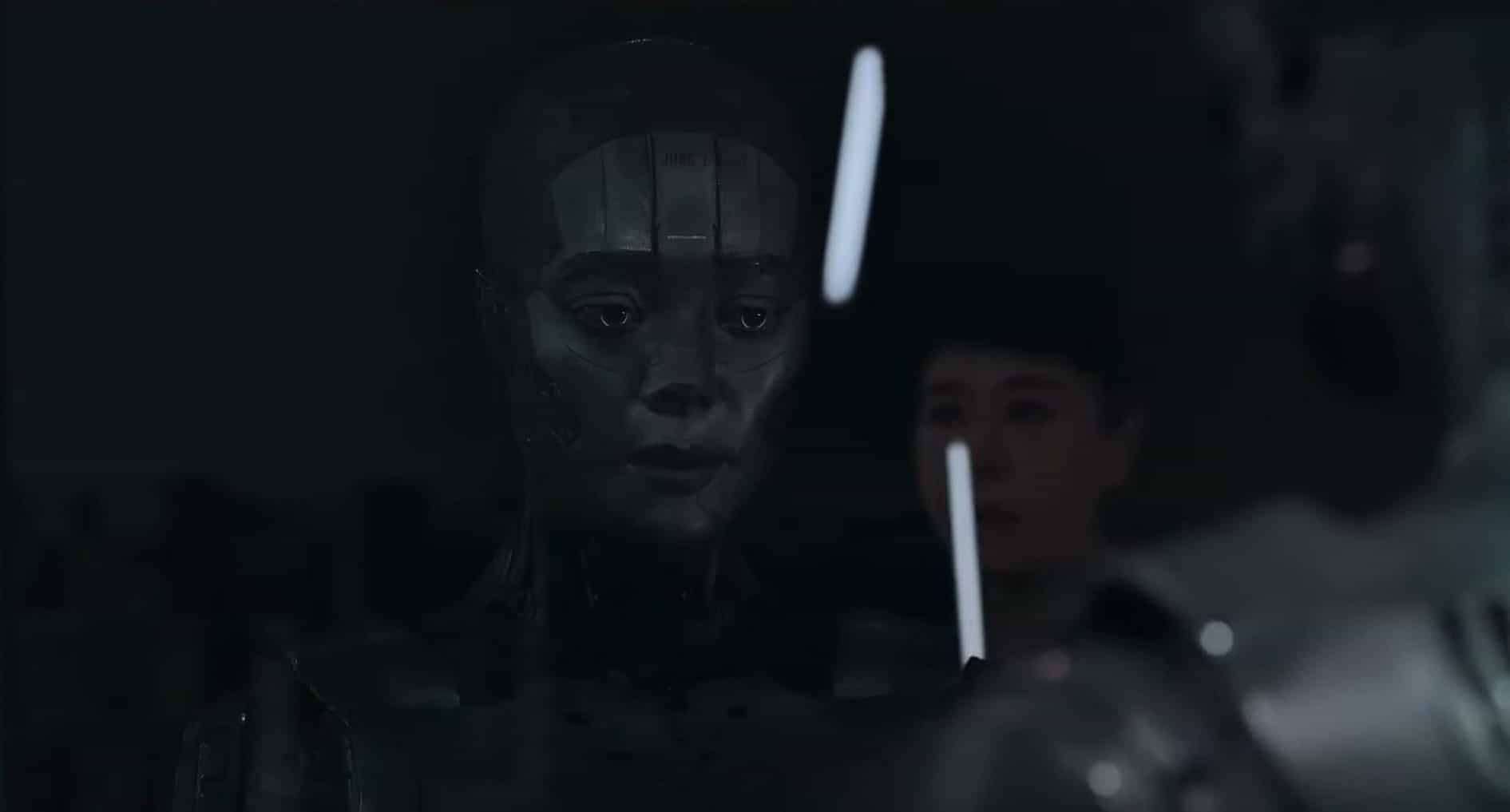 I thought this movie was pretty good. I was surprised if I’m being honest. I thought it was going to be focused on a space battle taking place, but it was far deeper than that. The morality of what is human or not even if it contains the brain was a question that was constantly put to us, and it was never answered. But that was deliberate because it’s down to us to decide. Based on what we saw in the movie, you’d say that they were all human apart from the shell. But I imagine there would be others that would think otherwise.

The fight scenes within this movie were incredible to watch. The opening sequence was really gripping, and I was impressed with how menacing they could make that giant robot. I really felt the suspense and the unpredictability of what was going to happen in that opening scene.

The score behind this movie was also something that I feel definitely needs to be spoken about. As it was extremely well-suited and evoked the emotions that it needed at the right moments. For me, in the final scene, I thought it was so well suited and provided an eerie dystopian haunting sound over the top of watching a daughter die and a version of the mother surviving.

What also made it more impactful was the fact that it was Kang Soo Yeon‘s last movie appearance before she sadly passed away, so it made it hit even harder. I was a big fan of this movie. They nailed the sci-fi world that needed to be created in the not-so-distant future. It contained performances that were handled delicately and were well crafted to be well suited to the style of movie that it was.

Also, it provided a thought-provoking subject that could well be facing humankind in a few hundred years. With a short runtime, it managed to get everything inside of it that it needed to in order to make the viewers feel connected to the characters and allow the ending to hit with the impact that it needed.

Also Read: That 90s Show Ending Explained: Will Leia And Nate Get Together?

Tokimori-san is Completely Defenseless Chapter 5: Release Date & Where To Read?