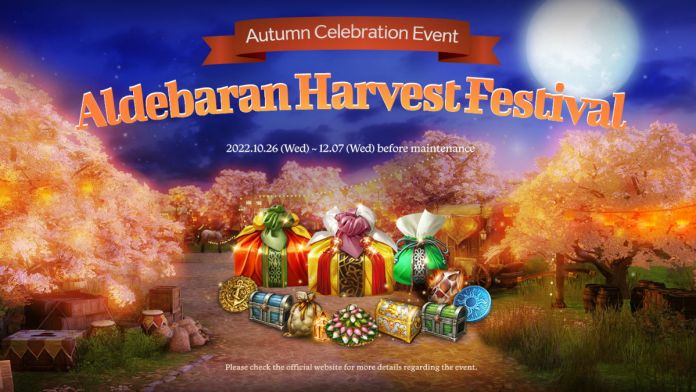 Lost Ark’s newest event is here: The Aldebaran Harvest Festival! To celebrate the old traditions of Aldebaran, which is basically Arkesia’s version of Thanksgiving, players will go on journeys to collect different kinds of food to prep for the big feast. You can get lots of helpful materials during this event, including weekly Pheons and honing materials. Today, we’ll show you all the important stuff in our Lost Ark Aldebaran Harvest Festival event guide!

To get started with the Aldebaran Harvest Festival event, head on over to any capital city, which includes Nia Village, Luterra Castle, Vern Castle, and so forth. You should see a new NPC named Morimototo who is wearing a chef-themed Mokoko costume. Talk to them and they’ll give you a quest to head on over to the Mokomoko Night Market.

The Mokomoko Night Market is a new island that is located directly north of Yudia and West Luterra, near the Wall of Procyon. The sailing path there is very easy, so you don’t have to worry about any sea hazards.

Upon arriving at the island, you’ll meet with Morimototo again. Follow the quest line—it’s very straightforward, and it’ll explain the basics of the event. Essentially, you’ll collect food items from various endgame activities, and there are four types.

Warne will let you craft Aldebaran Gift Sets, which are needed for rewards, and there are three tiers. Each type of gift set can get you different rewards, so make sure that you only craft gift sets that you know you require. Here’s a list of what you need to craft them:

Of all the things you can get, some noteworthy items include weekly Pheons, Una Instant Complete Tickets, Bloodclaw’s Glittering Coins, Magick Society Reagents, Metallurgy and Tailoring books, and of course honing materials.

So, overall, you probably don’t need to worry about running out of food items. As long as you’re completing your weekly stuff like Legion Raids, Chaos Dungeons, and the like, you’ll have a steady supply of food.

That concludes our Lost Ark Aldebaran Harvest Festival event guide. The event runs until December 7, so make sure to get all you want before it’s over. Let us know if you have any other questions or tips in the comments below!

How Expensive is the Kiriko Witch Skin in Overwatch 2? – Answered

How to Play Goldeneye 007 on Nintendo Switch