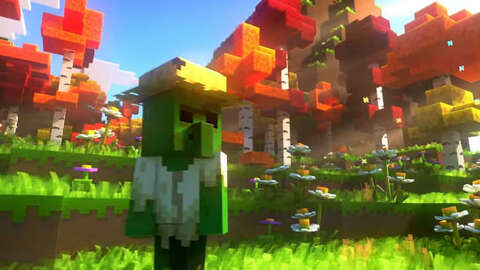 Minecraft Legends seems to deviate heavily from the original game’s formula and focus on strategy, and Mojang showed it off at the first Xbox Developer Direct on January 23rd. The presentation gave us a glimpse into competitive multiplayer, and as you can see, in Minecraft Legends you will (mostly) fight instead of build.

Minecraft Legends allows you to create alliances with returning Minecraft creatures as well as new ones. Developed in collaboration with Blackbird Interactive, the crossplay multiplayer experience forces you to share your army and resources with the rest of the team. This means that collaboration is the key to success as anyone trying to do the same will fail. Just like the campaign (and the original Minecraft), the map is procedurally generated, resulting in a different experience every time you play. Piglins will also be there to attack both teams so you can’t fully focus on the other team.

There is also a lot to build in Minecraft Legends. When the enemy plans an attack on your base, it’s up to you to stack up your defenses and make something as impressive as possible. This includes walls, gates, towers and an upgrade station. How you create it is up to you, and you can also place traps to slow down unsuspecting players who manage to get inside.

From a distance, you still have a few tricks up your sleeve. Siege weapons can fire projectiles from very long ranges to devastate the enemy base, but anti-siege weapons can send back a wave of pain. This isn’t the Minecraft you know, but the spirit of improvisation certainly lives on.

https://www.gamespot.com/articles/minecraft-legends-and-its-massive-multiplayer-sieges-release-in-april/1100-6510780/?ftag=CAD-01-10abi2f Minecraft Legends and its Massive Multiplayer Sieges will be released in April

Video game characters that are fun

Harrison Ford humiliates himself in a laughless comedy