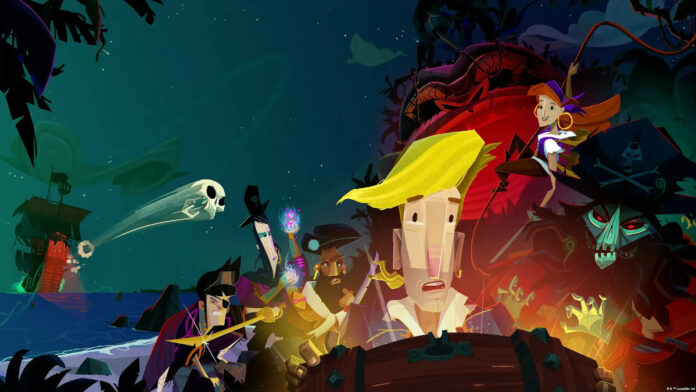 Monkey Island fans rejoice! The popular series is back thanks to the return of creator Ron Gilbert and the addition of game co-writer/designer Dave Grossman, art director Rex Crowle, and composers Peter McConnell, Michael Land, and Clint Bajakian. With their combined talents, the new Monkey Island chapter created huge expectations among the gaming community.

It’s been a long time since Guybrush Threepwood finally met his match in the form of the zombie pirate LeChuck. After years of being locked in a battle of wits, Guybrush is ready to give up. His true love, Elaine Marley, has turned her focus away from governing, and Guybrush himself is feeling unfulfilled.

A new generation of pirates, led by Captain Madison, has taken over Melee Island and turned it into a place of lawlessness and disorder. Businessman Stan has been imprisoned for supposed “marketing-related crimes,” leaving the island in a state of chaos.

The question of what the secret of Monkey Island is has long puzzled fans of the popular game. Finally, they are going to have their answer in this latest (and last?) chapter. The truth behind the game has been a subject of speculation for years, and now players will finally get some answers as Guybrush needs to collect five keys to open the hidden chest on Monkey Island.

Now here’s the thing. The Secret of Monkey Island is a game with many different endings. Depending on the choices you make during the game, you will see a different ending.

Guybrush Threepwood narrates a story to his son at the end of the game. This story is about the Secret of Monkey Island of course. But things are complicated because there are many different ways that the story can end.

Choosing different answers while talking to Boybrush will result in a different ending. As we’ve mentioned above, the choices that you made during the game also affect the ending that you get. For example, at some point in the game you can leave the amusement park with Elaine even without acquiring a certain key.

We don’t want to get into the details of how you can get every ending in the game as that would take away from the gaming experience and that’s not what we want to do in this article.

At the end of the day, it’s up to the player to decide how they perceive the ending of Monkey Island.

New World: How to Claim the Free Roman Soldier Skin

How To Manual Save Your Game In Coral Island