The Last Of Us Episode 3 will show us both the past and the current scenarios. And good news, we will also get to see Tess in this Episode. The episode 3 Trailer is out, and throughout this article, we’re gonna be breaking down the new look.

The show has so far given us a good view of a few of the characters that we only met briefly in the game, and this additional character growth has really helped the viewers understand who these people are.

For instance, episode 1 featured a full day in the life of Sarah, and it appears that episode 3 will expand significantly on what was presented in the source material.

We first met Bill in Lincoln, and it wasn’t until we had made our way across the town that we learned what had happened to Frank. There is a lot to cover in this article, but if you haven’t finished the game and do not want to find out what happens next, read at your own risk.

The Last Of Us Episode 3 Spoilers

Bill is shown seated in front of some CCTV monitors in the opening of The Last Of Us Episode 3 Trailer. When you first arrived in Lincoln in the game, everyone had fled the town, and Bill was the only one behind to keep watch over it.

He had set up traps all around it, and once you had escaped one of them, you headed to his house inside the church. According to what he claimed, a military caravan just crashed in the town, and you found your way there to grab a truck battery. 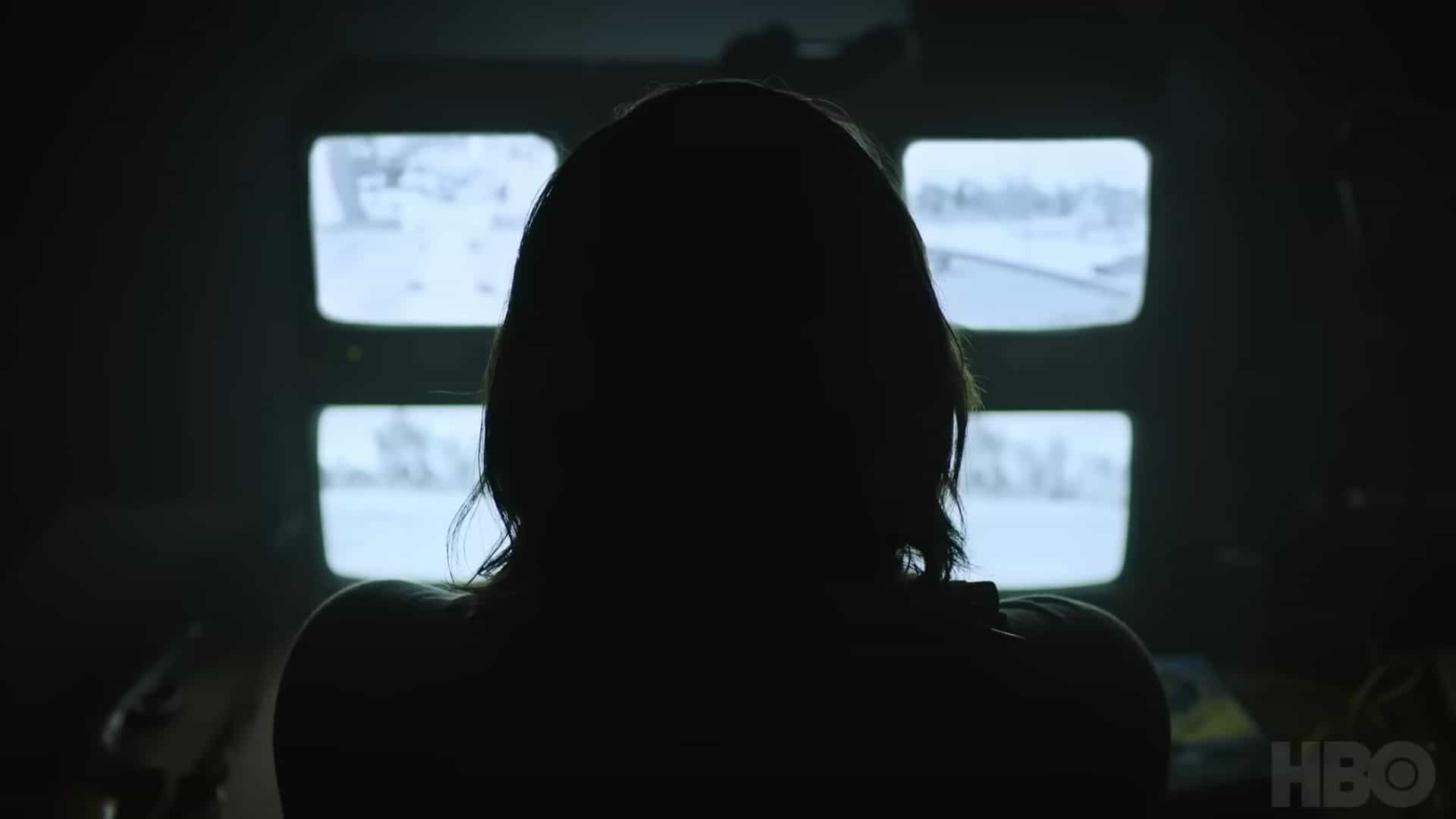 As the infected swarmed you and drove you into a school, you discovered that it had already been taken. You managed to escape from a bloater, and as you were moving through a neighborhood, you stumbled into Frank.

Turns out that he and Bill had been lovers but after a while, Frank got to the point where he couldn’t stand him and thus he made a break for it when the caravan crashed. Unfortunately, he got bit along the way and he ended it all after leaving Bill a note saying how much he hated him.

Now you were able to use the truck he’d hooked the battery up to and drive to Pittsburgh, which I’m guessing will be coming later down the line. This episode itself seems to be detailing Bill’s time in the twenty years after outbreak day and also his relationship with Frank.

Now on the screens, we can catch a group of people and Fedra soldiers. My guess is that the whole town leaves and this is when Bill can set it up as his home, free from the control of others. Love the old PC we can catch to the left, and this seems like it’s running Windows 2000.

He says not today, you new world order jackboots and it seems like he might even be a conspiracy theorist that thinks the Government has unleashed the cordyceps to take control.

We see him basically doing a tony stark and welding away, which is when a trap is sprung, and we meet Frank. If you’ve watched the White Lotus, then you’ll instantly recognize this guy, and this is being Murray Bartlett who plays Armond in that show. I also think that casting Nick Offerman is genius and he suits being Bill down to a T. The guy looks exactly like how he does in the game, and they even have the belt of shotgun bullets that he wears over his shoulder. 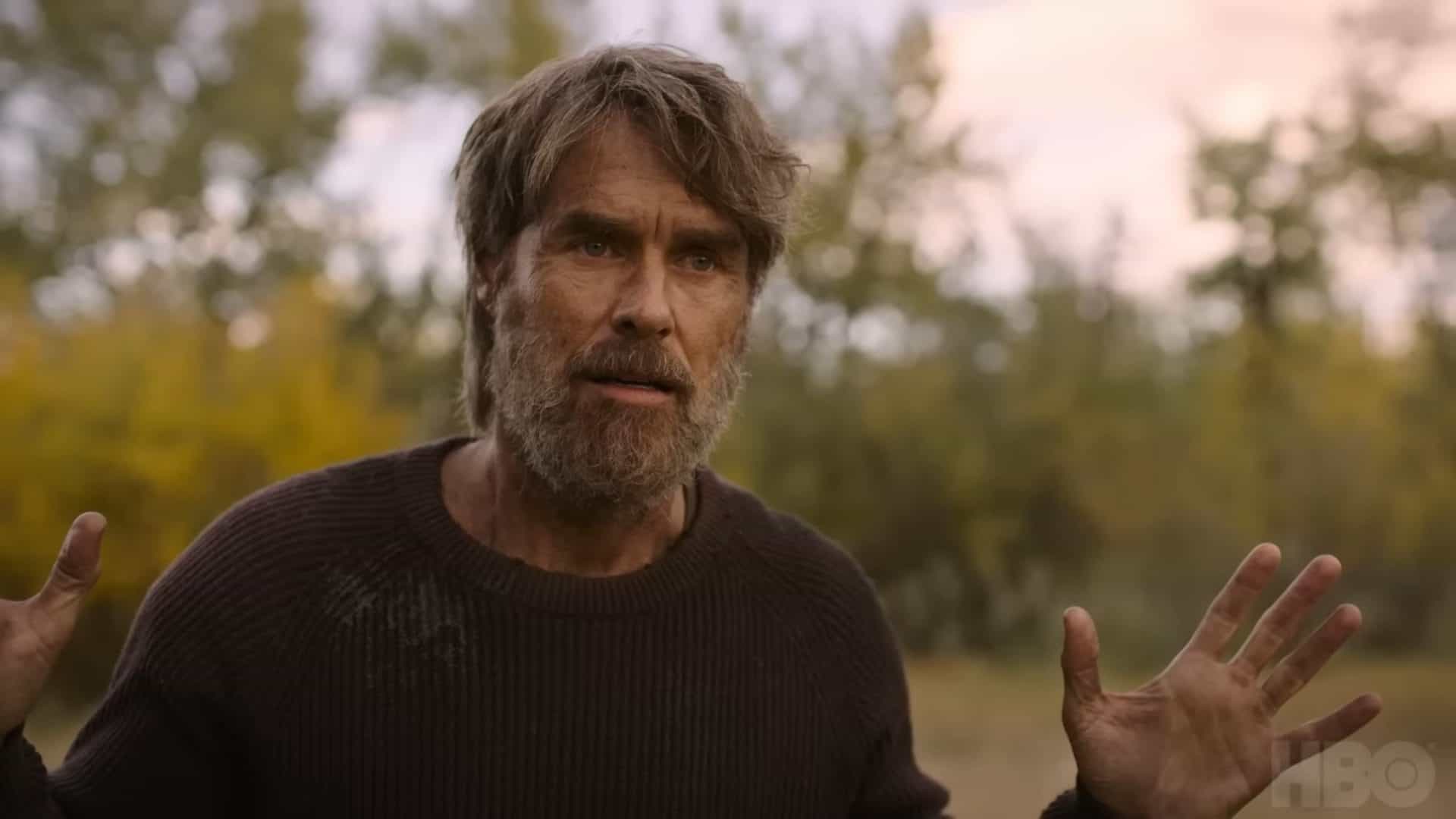 Bill is one of the most interesting characters in the first game, and we learn very little about him. He’s very much a closed book and mirrors Joel in some ways. Both end up looking after someone that they initially don’t want to, and they see just how heartbreaking that can be.

Now intercut with this is shots of Bill eating on his own. We catch him pulling a carrot out of a garden, and in the background, we can see a white church. This is potentially where he’s holed up at. He’s living a very solitary lifestyle, refusing to let people in, and this is what keeps him alive. However, he clearly lets Frank in, and the two are pretty much opposites to each other that are gonna have to learn to get along.

Frank is just a normal guy, whereas Bill is a dooms dayer that’s prepared for every eventuality so that he can survive. I think their relationship is gonna be fascinating to watch, and with the latter being a control freak, it’s gonna be interesting to see how the tension between them plays out.

Tess Returns Through A Flashback

Now during The Last Of Us Episode 3 Trailer, we also see Ellie walking around a house. She’s wearing the classic red T-shirt that she had in the game, and in a draw, she finds a gun and a letter. It’s possible that this letter was the one left behind by Frank and this would build upon what we talked about earlier.

This gun is also the one that she uses throughout the game, and it’s based on a Beretta 70s series. Originally she didn’t get this until much later on, and she picked it up at the hotel when Joel was being attacked. Joel had forbidden her from having weapons, but after she saved his life here, he decided to trust her more. 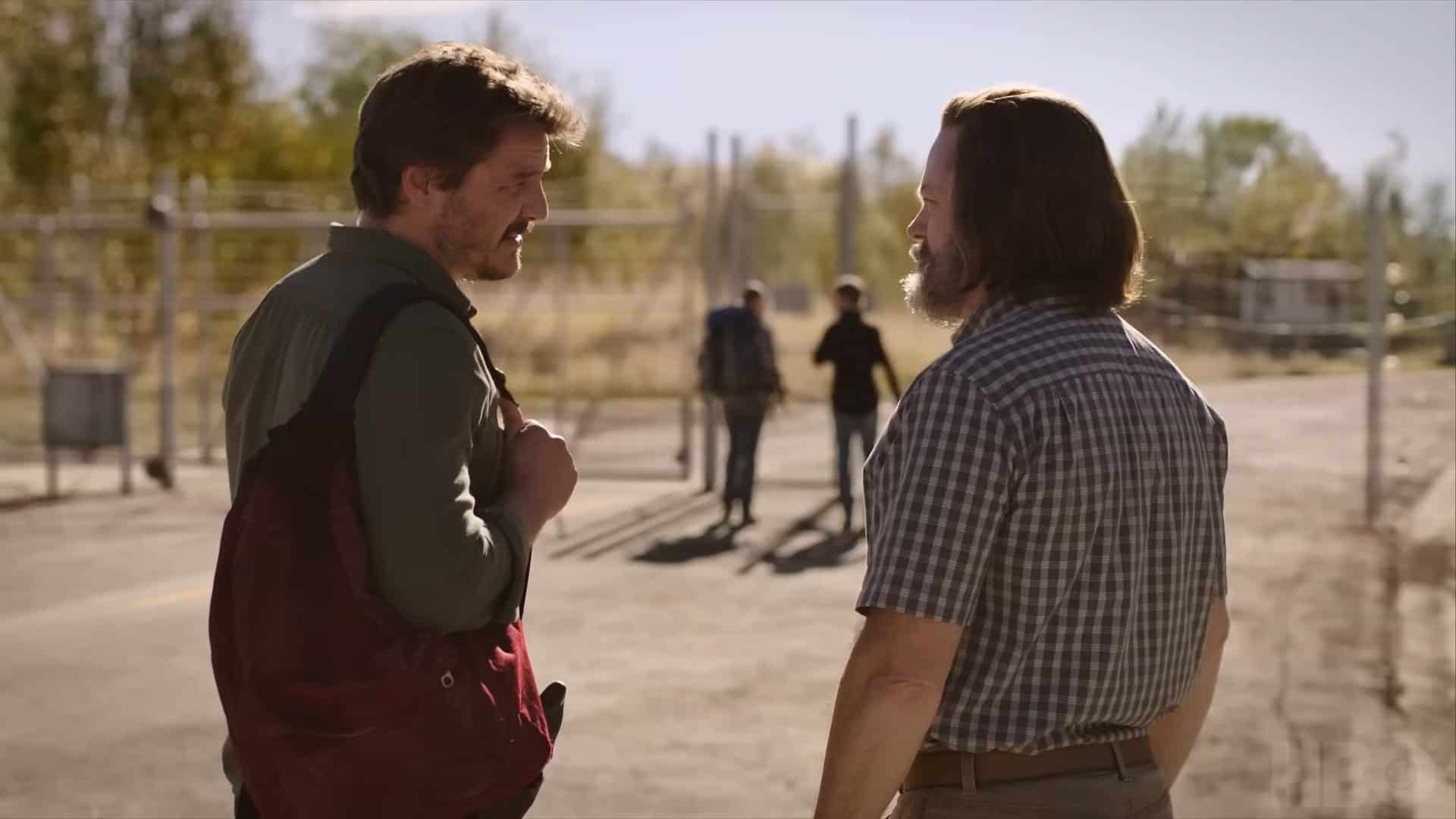 Tess in the background with Frank (CC: HBO)

Now we then cut to Joel warning Bill that there will be Raiders soon. In the game, he said that he’d never actually been to Lincoln himself, and going out there with Ellie was an act of desperation because of Tess’s death. We can actually see Tess in the background standing with Frank.

So they might be a flashback, and I’m guessing that they’ll pop up throughout the episode showing their meetings. They of course, had the whole thing with the radio set up in episode 1, and we’ll probably see them trading with the pair.

Now, this prediction of raiders comes to pass, and we see people attempting to swarm one of the fences. Bills trap sets off, and it burns them, but it seems like something bad goes down as he ends up telling Frank to call Joel. Episode 1 of course ended with 80s music playing on the radio, and this signified danger.

From here, we cut to Joel and Ellie on the road, probably making their way out to him. They pass some corpses in the road, and you’d often stumble across these when you were making your way through the game. One of them looks like a kid, and it shows how dangerous the world is now.

From here, we see a shot of a truck ramming through a fence, and we know from other scenes of the trailer of The Last of Us Episode 3 that is Bill driving this. We also see Ellie opening up her knife and moving it near one of the infected heads. This is a stalker that has started to go blind, and he’s on his way to becoming a clicker due to the fungus now growing out of his eye. 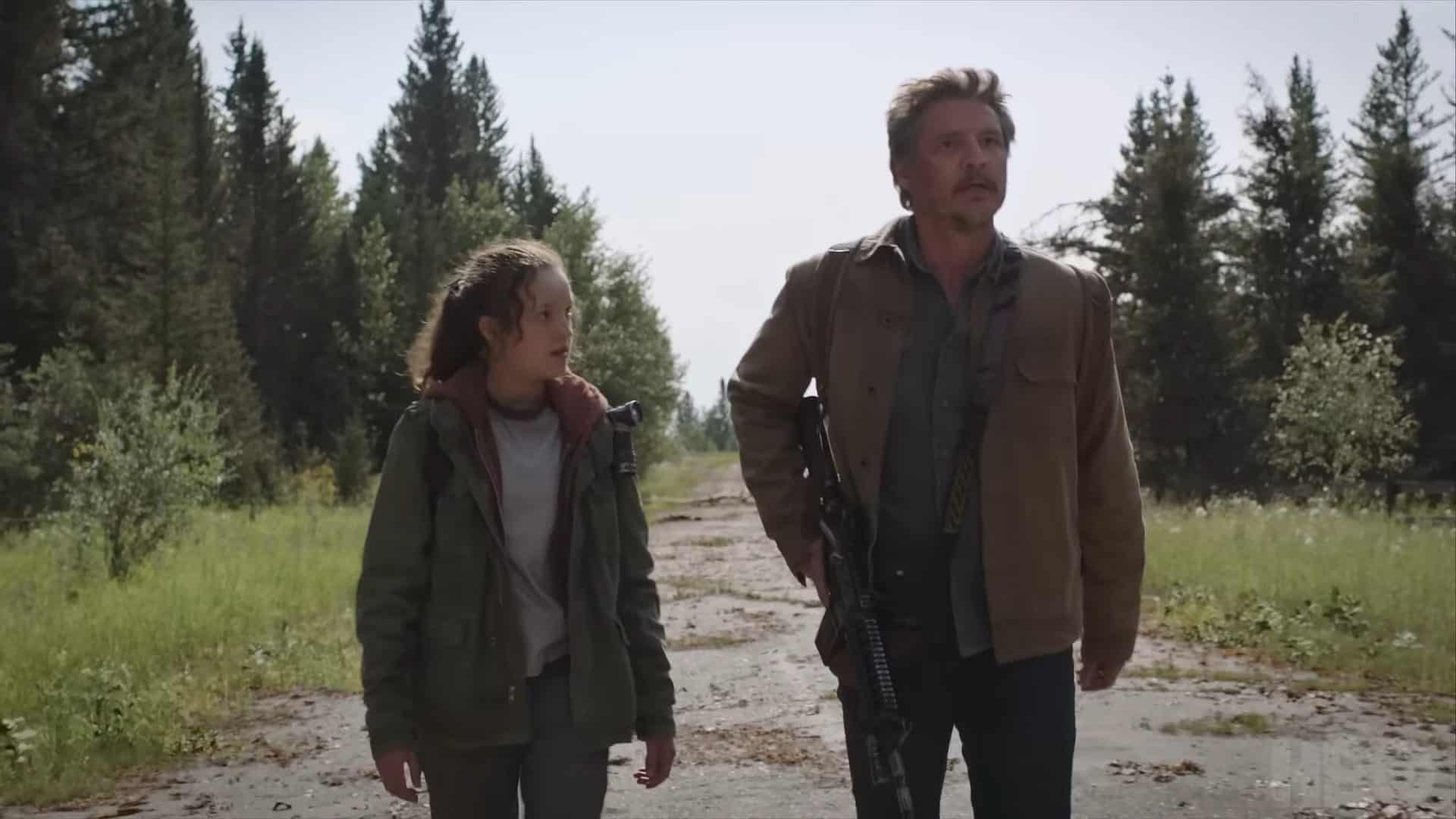 Ellie and Joel are going to Bill (CC: HBO)

Due to Ellie crouching down, I’m guessing this guy is on the floor somewhere, and he might be stuck in one of Bill’s traps. I thought for a second that he could actually not be attacking Ellie due to her already being infected. It would kinda break the rules of the game though, and the Clicker in episode 2 of course went after her. There was that one that gave Tess the kiss of death as well, so I really doubt that’s the case with it. Instead, I think it’s probably in a bill trap that they come across when they’re making their way out there.

The trailer ends with Bill reassuring Joel that they’ll be fine but whether this is true or not remains to be seen. He looks pretty out of it when he tells Frank to contact Joel, and I think he’d only do this in dire circumstances.

Now Lincoln was a part of the game where you never fought against any humans. It was swarming with infected but as for raiders and the like, they were completely absent. Therefore, Bill might not have been as prepared for this, so he ends up getting Frank to get Joel. The radio message at the end of episode 1 also teases that, and I’d love to hear your thoughts and theories for the next week.

The Last Of Us Episode 3 Release Date & Preview

The Last Of Us Episode 3 will release on 29 January 2023 on HBO. This Episode is titled “Long Long Time”. At the time of writing, 9 episodes are scheduled for this season. This means there will be only six episodes after this week’s episode.

The Last Of Us Episode 3 Release Time & Where To Watch

Episode 3 of The Last Of Us will air at 9 pm PT in the US. New episodes of Fire Country are released every Sunday. The episode 3 release timings for the rest of the world are as follows:

If you have HBO on your TV, you could tune in at the time mentioned above. But, if you missed the episode while it was airing live or prefer Streaming The Last of Us show, then then you can stream it on HBO Max.

44 Best Anime Like Hellsing That You Need To Watch